Achieving Continuous Delivery is no child's play, but our Jenkins Pipeline Tutorial can make it easier for you to achieve your goal.

Jenkins has risen to become an expert in Continuous Integration, Continuous Testing, & Continuous Delivery, and assumes a critical role in conveying great applications or items. It utilizes a component called the Jenkins pipeline for achieving Continuous Delivery (i.e.) the capacity to deliver applications routinely for a long stretch. This Jenkins pipeline guarantees that the product is consistently prepared for creation. As a leading QA Company, we have been using the Jenkins Pipeline and found it to be very effective. So if you are looking for a Jenkins Pipeline Tutorial that covers everything from the basics of the pipeline to learning how to perform parallel execution, you’ve found it.

What is a Jenkins Pipeline?

A pipeline in the Jenkins CI/CD can be defined as a series of events or even tasks that are interconnected to each other in a specific order. To put it in simpler terms, the Jenkins pipeline can also be characterized as a set of modules or plugins that enable the implementation & integration of the Continuous Delivery pipelines within Jenkins. It has an expandable automation system that can be used to build basic or complicated ‘template’ distribution pipelines via the Domain-specific language (DSL) used in the pipeline. Continuous Delivery in the Jenkins pipeline comprises 4 major states,

We will be taking a closer look at these states later on in the Jenkins Pipeline Tutorial, but first, let’s take a peek at the many advantages that the Jenkins pipeline CI/CD has to offer.

Advantages of the Pipeline:

Knowing the basic keywords that will be used in the pipeline is the first step that we will be taking in our Jenkins Pipeline Tutorial. So let’s see what these keywords are and how you can use them in the pipeline. We’ll start with ‘Steps’.

Stage and Stages are two different keywords that you shouldn’t confuse yourself with.

So using color, we will be able to find out the current status of the stage.

So as seen above, there are two types of the pipeline, and the declarative pipeline is the recent addition that has the more simplified and opinionated syntax when compared to the scripted pipeline. Now let’s take a look at the syntax for these types.

Variables in the pipeline:

What is a variable?

A variable is used to store values. There are two types of variables, and they are predefined and user-defined variables.

Parameters are used to pass the following types of data dynamically.

Implementation of Parameters in Pipeline: 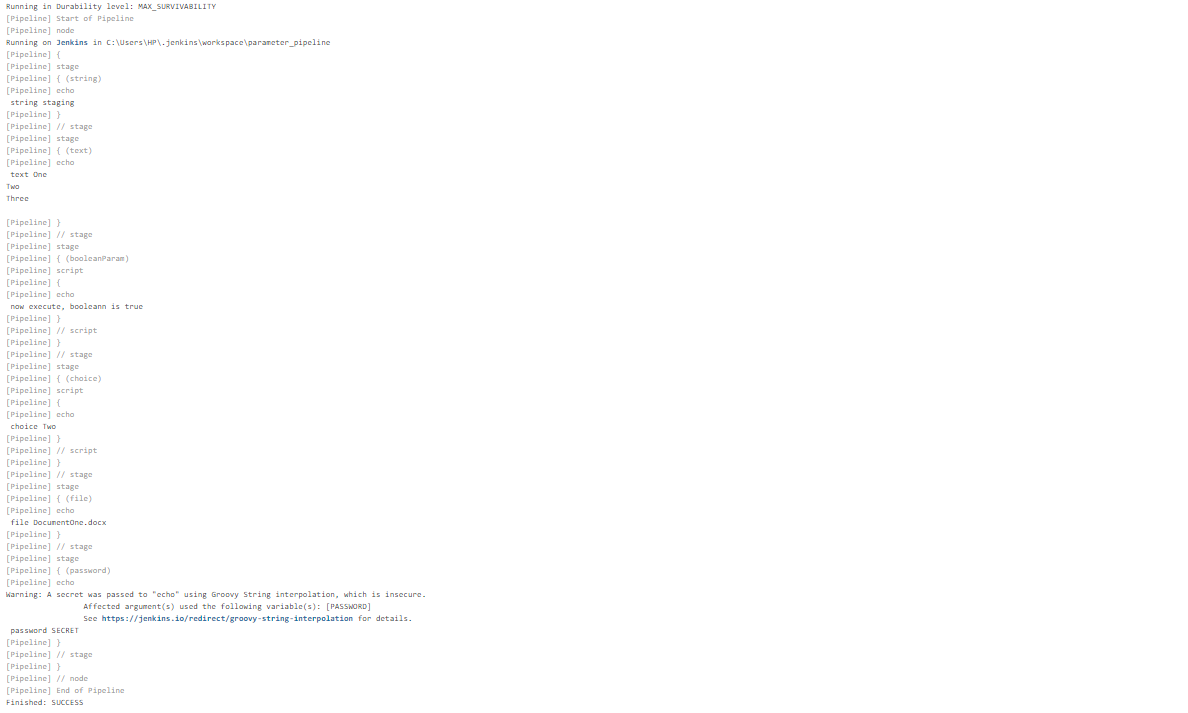 We will be focusing on the parallel build using the Jenkins declarative pipeline in our Jenkins Pipeline Tutorial now. So you can trigger your build system by Jenkins if there are some steps that could possibly run at the same time since they have no dependencies. By following this method, you will speed up your build process and save time for other sequential steps. As one of the best automation testing service providers, we don’t just stop with using the best tools, we also focus on using them in the best way possible.

We hope you enjoyed reading our Jenkins Pipeline Tutorial and found it to be informative at the same time. As promised we have covered everything including the basics of the Jenkins pipeline, seen its advantages, explored all the perquisites like variables and parameters that you will need to know to use it effectively. So make sure you don’t just try the Jenkins pipeline, make sure you use it effectively.