In this blog article, you will learn iOS App Testing approach.

Using iOS, you can develop mobile apps. iOS development strongly follows the Model-View-Controller designs pattern, which separates data from visual objects. As a mobile app tester, if you are familiar with some basics of iOS development concepts, you will understand the importance of testing the iOS apps on real devices using different orientations. There are two UI frameworks available for iOS app development. One is UIKit, and the next one is SwiftUI. In iOS 13, SwiftUI was introduced. So any mobile apps which are developed using SwiftUI don’t work on older versions of iOS.

If you are participating in any discussions related to SwiftUI development, bring this drawback to the table as a discussion point. If your team is developing a brand new app and are not worried about older version compatibility, then SwiftUI framework is an excellent choice.

In this blog article, you will learn iOS App Testing approach.

Using iOS, you can develop six different types of apps. 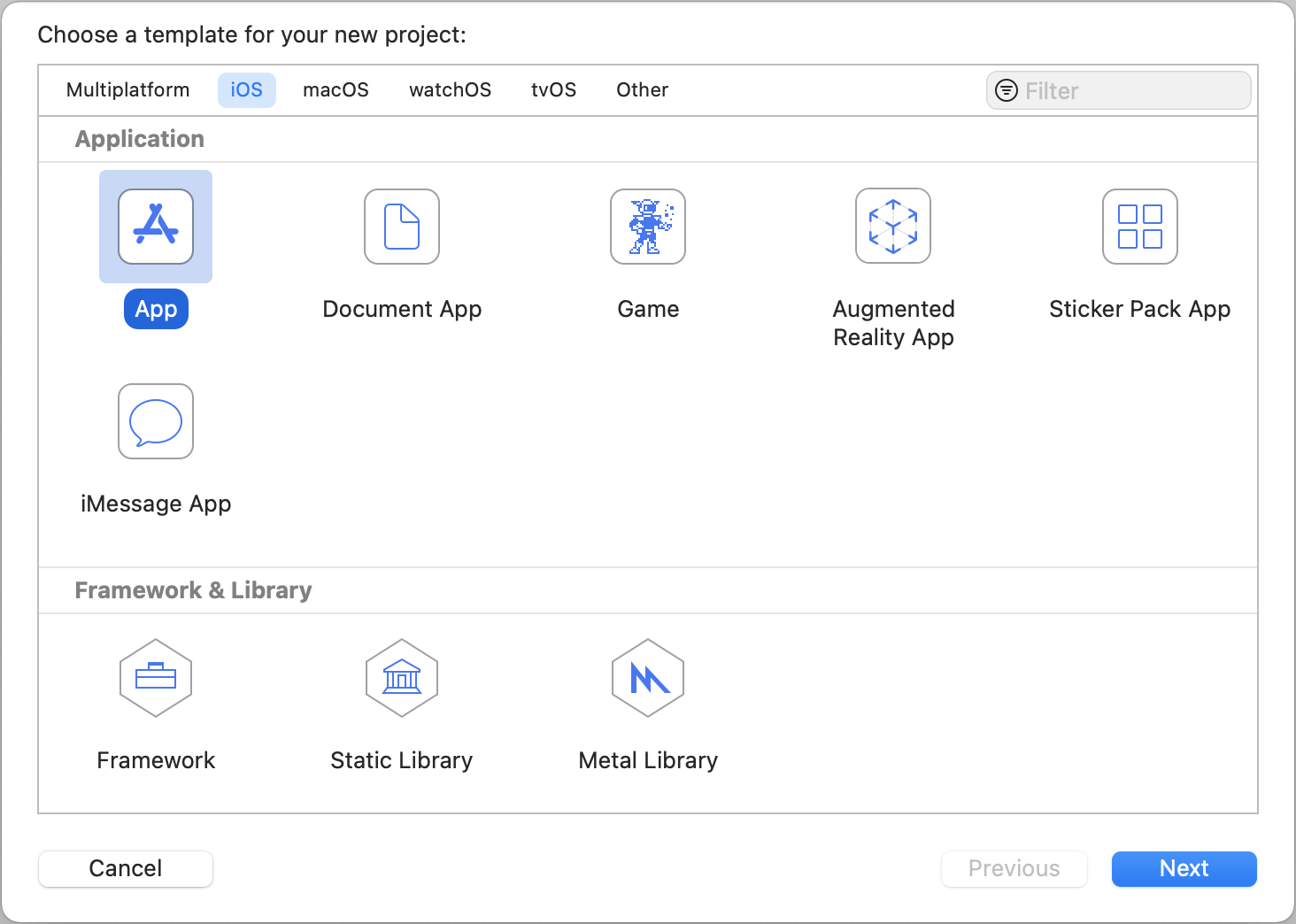 Default App – This is the widely used iOS app type. As we mentioned before, you can select either ‘Storyboard’ or ‘SwiftUI’ for the app interface. However, now, you can use the Document App option to create file management apps.

Game – In this app type, XCode will add the appropriate gaming kits for game app development.

Default App – This is the widely used iOS app type. As we mentioned before, you can select either ‘Storyboard’ or ‘SwiftUI’ for the app interface.

StickerApp & iMessage App – Message framework was introduced in iOS 10. Developing a Sticker App is easy. There is no coding involved. You can also create your own Standalone iMessage app.

Once you get the build for testing, first check the content and images because users will easily spot the content issues. Let’s say the images in your app are broken. It will spoil your app’s reputation drastically.

If your team has decided to remove any old functionalities from the mobile app, make sure it does not impact the users when they upgrade. Before retiring any features from your mobile product, analyze the usage of the functionality and its importance. Sometimes app upgrading may lead to dissatisfaction.

After deployment in AppStore, use your device and install the app. Checking the download experience of a new version using Persona will help find bugs & new features for your app.

If your app supports multiple languages, then test the translation and other locale details.

As a mobile app testing company, we highly recommend testing mobile apps on Real Devices. Mobile developers use simulators or live preview to check the designs and functionalities during development. Deploying on a simulator is an easy job for a developer. Now, SwiftUI supports live preview for different device combinations.

Checking the designs and functionalities on real devices during development will slow-down the progress. Once the app is ready for testing, it should be tested on real devices.

Simulators use your computer’s network. So it does not mimic real-world network conditions. Sometimes, your apps may crash due to memory problems. Simulators run on Mac. So your app will not crash on simulators.

If your app connects with Bluetooth or Camera or IoT devices, then testing on a real device is a must.

Executing a regression test suite manually on multiple devices is a tiresome task for a mobile app tester, and it is error-prone. So automating manual testing eases mobile app testing. Appium is the idle choice for mobile app automation testing.

To run your automated test scripts on real devices using Appium, you need the following tools.

HomeBrew – HomeBrew helps you to install and manage the required packages for Appium setup.

NPM – Node.js package manager is required to install Appium. If you would like to install Appium using the Desktop app, you can try directly instead of trying the command line installation.

Carthage – Carthage is a package that helps you to resolve framework dependencies. Before building the WebDriver agent app, Carthage needs to be installed because Carthage will resolve the dependency issues in the WebDriver Agent XCode project.

Once the WebDriver Agent app is installed successfully on the real device, you can execute Appium scripts.

Managing mobile devices locally for testing purpose is an overhead cost for your team. For mobile app testing projects, we use BrowserStack App Live to test a mobile app on Cloud Real Devices.

You have the below advantages if you use Cloud Test Platform to test mobile apps.

Battery Charging – Let’s say you have 50+ mobile devices for testing. Before commencing the testing, you need to plug-in the charger for each device to have sufficient battery power during testing. If you test it on Cloud Real-devices, you need to bother about Battery Power. Everything will be taken care by the cloud vendor.

Video Recording – When you perform testing on the local device, you need to record and save the screen-cast as a piece of evidence. The cloud platforms will record your testing sessions automatically. You need to spend your time recording the test session.

Network Simulation – If you want to test your mobile app on low Internet Bandwidth, then you will have to set up a router to configure a low bandwidth Wi-Fi network. A tool like BrowserStack has a feature to launch the real device on various network conditions.

iOS has four orientation types. Based on how the user is holding the phone, the appropriate interface orientation of the apps will be changed.

There is another orientation available. That is Upside Down. It works only for the iPad. It means the iPad supports all four orientations.

While testing the mobile app, change the mobile device orientation and see how the app is reacting.

As soon as you get the build for testing, walk-through all the menus and dialog boxes in your mobile app.

Unit Testing is for developers. iOS provides a Unit testing bundle to add tests to your mobile app code-base. When you have comprehensive unit tests, it will reduce the number of bugs. If your developers are following the Test Driven Development model, then you will know the importance of Unit tests and their benefits. Writing tests first and building the app to make the tests pass helps your developers to have a clear understanding of the features of functionalities that are being implemented.

Writing tests for everything will slow-down your development process. Let’s say there is a change in functionality. You will have to update the test and code. It is a time-consuming effort. However, the process helps you to build a reliable app with fewer bugs.

Conducting performance testing only for Mobile App APIs is not sufficient. The poorly managed main thread may lead to unresponsive for user inputs. When a mobile app is performing poorly, the rating of the app will come down drastically.

Sometimes memory leaks can be detected only when the app is used for a longer duration. You can also use Appium scripts and execute them for longer hours to unearth memory leaks.

Some iOS apps may take time to draw UI screens. In automation test scripts, you can set the excepted screen loading time. So, the scripts will fail if the screens are loading more than the expected load time.

If your app needs device-related permissions from the user, then mention why the user needs to grant the permissions in the app description.

If the user does not like your app immediately after installing, he/she may never revisit. As a mobile app tester, you need to make sure the app adds value to the user.

Multiple Steps – If your app has a lengthy registration or form filling, your users will be frustrated.

Scrolling – Your user should get the required information within the screen limit. However, it is not possible for all the scenarios. It would be great if never-scrolling is avoided.

Auto-Filling – If the app is an interesting one and users use daily, it needs to leverage the auto-filling feature. Because your app users will hate to type the same data again and again.

Before releasing an iOS app, you need to test it on multiple devices. Testing the app only from functional testing stand-point will never address the real-world issues. Test both functional and non-functional areas. Insufficient testing will allow users to experience the buggy app.

Once a mobile app’s reputation is lost due to bugs, it is hard to regain.

App quality starts from coding. If the unit testing covers all the code components, then it will reduce the number of bugs. Mobile app testing service is one of the core testing services of Codoid.

Web Applications has only a few browser combinations. However, mobile apps need to be tested on different OS, platforms, and versions. To release an app quickly, it needs to be tested quickly. Testing the same scenarios manually on multiple devices needs more testers and time. Automate all your regression test cases to speed-up the testing.