A Fundamental iOS App Testing Tutorial to Get Started with

Looking to get your app approved by the App Store? Read our iOS App Testing Tutorial and find out the basic focus points, tools & methods.

Millions of people in India, and billions of people all over the world use iPhones. Apple is very stringent in the way they make their products. They have been great at building quality state-of-the-art hardware that is complemented well by their software. Privacy and security are the other features that set Apple products apart. Apple’s computers are powered by macOS, and their iPhones and iPads are powered by iOS. In this iOS App Testing Tutorial, we will be taking an overview of the testing process for an iOS app.

Let’s start this iOS App Testing Tutorial by reviewing the specific necessities for testing. iOS was released on June 29, 2007, and unlike Android, Apple does not allow iOS to be installed on non-Apple devices. Basically, iOS and iOS apps may only be loaded on Apple devices. Apart from that, the approval process to get your app on the App Store is no easy task. Even the smallest error can get your app rejected. So there is absolutely no room for errors and as a leading mobile app testing services provider, we have been able to ensure that the apps we tested get released without any issues. So if you are developing an iOS app, then it must work with all iOS versions and devices. Now, let us see a sample diagrammatic representation of the features that need to be tested in iOS. 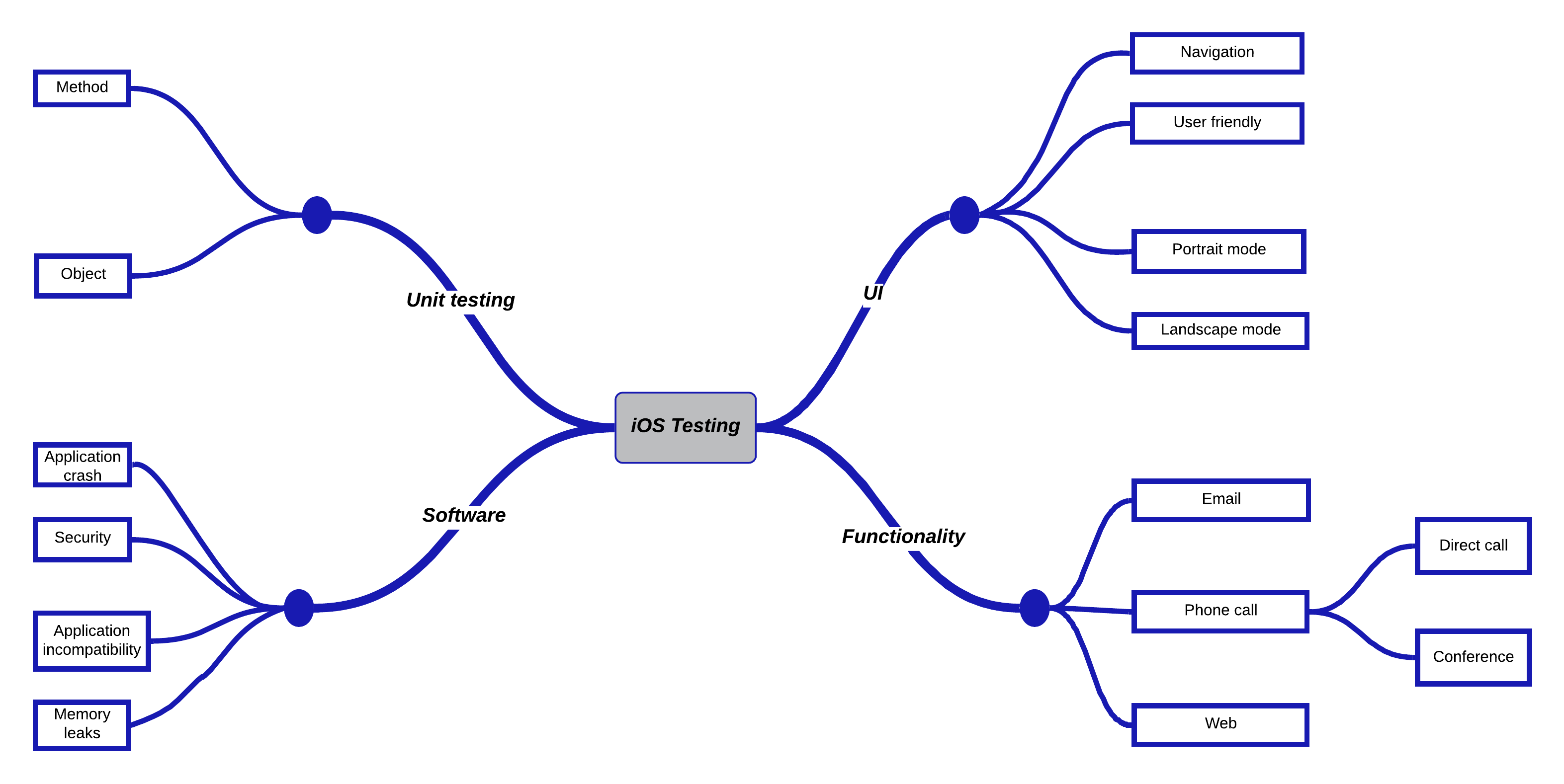 The diagram is pretty much self-explanatory and we can clearly see the aspects we have to test under each section like UI, Functionality, and so on. Now let’s take a look at a few aspects you should primarily focus on.

As stated earlier, even the smallest of errors can make it hard to get your app approved for the app store. So make sure to avoid one of the most aggravating issues a user might face, application crashes. Flaws and memory leaks in the software are some of the major reasons why an application might crash when it comes to iOS.

As the name suggests, there will be a leak in the memory that causes the application to crash. But how does this happen? The memory leak here refers to the data reserved in the system which are no longer used by the software. This might make the application crash abruptly. So memory leaks should be considered as bugs that should be fixed immediately.

Security and privacy are a few of the hallmark features of Apple. So you can expect Apple to strictly review your application for such vulnerabilities. Even the smallest of deviations anywhere can drastically impact the chances of your app getting approved. So make sure that you develop your app in a way that the app doesn’t ask for any unnecessary permissions. If the demand is unavoidable, then you have to clearly establish the reason behind your request.

Apart from the core functionalities, we have to check for broken links and either remove or fix them as needed. There should also be no placeholder content when you send your app for review. Everything should be finalized and tested before you send it through. For example, if your app requires the user to sign in, provide a valid demo account for them to use. Likewise, if at all your app requires any special configurations to function, include all the specifics. If any of the features require an environment that is not easy to replicate, then you should provide a demo video to guide them. Your app might even require a specific accessory or hardware for it to function well. So it is mandatory to send that hardware or accessory. Last, but not least, ensure that your contact information is complete and up-to-date.

We are all aware of the quality of Apple’s UI. They will not approve any app that has a poorly designed UI as it will not sit well with the brand image that they have created. So if your app is not properly formatted to match iOS, then you can kiss your chances of getting goodbye. So make sure you have attached screenshots that are accurate and not just edited versions that are misleading. If Apple finds your app to be misleading or very minimal lasting value, then they will not approve your app.

The features might be running perfectly in the current iOS version, but once the version gets upgraded, the features may take extra computing time or execution time. Or it might work well on one iOS device or version and not work on another. So compatibility is also an area of concern provided by the high standards set by Apple.

There are two ways to go about when it comes to testing software, manual testing, and automation testing. Now in this iOS App Testing Tutorial, let us explore the various types of manual tests you can use and the automation tools that will come in handy during the process.

There might be an ongoing uncertainty among many as to why we still opt to test a feature manually when automation is possible. Though manual software testing is the most basic of all testing methods, it aids in the discovery of critical problems in software applications.

Apart from that, before any new application can be automated, it must first be manually tested. Though manual software testing takes more time and effort, it is required to determine whether automation is possible or not. Manual testing concepts do not necessitate familiarity with any testing tool. One of the common software fundamentals says that “100% of automation is not possible”. So this mandates manual testing.

Some of the Manual testing types that are vigorously used for testing are:

Exploratory testing is executed without any test script or formal test plan. So exploratory testing is usually carried out during the early stages of development. It is used to report bugs, but usually, it will be used to identify potential bugs, (i.e.), the specific behavior of a feature might not be identified. Since it doesn’t include any formal test plan, the requirement for a particular feature can be missed, and that might lead to a serious issue.

Concept testing is more like a research done by the team. It involves asking questions to the customers about the concepts and ideas of the product or service before launching it. To put it in simple words, the reaction of the user is taken into account before launching the application.

Usability testing is the process of evaluating a product or service by putting it through its paces with real-world consumers. During the test, participants will often attempt to accomplish standard activities while observers observe, listen, and take notes. The purpose of this test is to discover any usability issues. Following this, we will be able to collect qualitative and quantitative data to establish the level of satisfaction with the product among the participants.

Beta testing is a type of user acceptance testing in which a product team distributes a nearly finished product to a set of target users in order to assess its performance in the real world.

A/B testing, also known as split testing, is a randomly selected experimentation process in which two or more versions of a variable (web page, page element, etc.) are shown to different segments of website visitors at the same time to see which version has the greatest impact and drives the most business metrics.

Next up in our iOS App Testing Tutorial, we will be looking at the automation tools you can use to make your testing better. But before getting into the details of it, we must understand why we use automated testing. Automated testing for iOS applications has numerous advantages. For starters, automated test scripts save time and effort by allowing one test to run tests simultaneously on several devices. It allows you to quickly identify bugs and performance issues.

Other advantages of automated testing:

There are many automation tools in the market. Some of the automation testing tools that we have commonly used are,

Appium is popular because of its adaptability and usability on both Android and iOS devices. Appium uses the JSONWireProtocol to interact with iOS devices.

Two important test automation frameworks for iOS app testing are XCTest and XCUITest. XCTest provides a framework for UI testing as well as the ability to construct tests for components at any level. XCUITest is typically used for functional testing, automation tests of common processes, demo sequences, or customer view behavior.

Detox is an automation framework that is used for testing mobile apps. The biggest advantage here is that it is cross-platform for both Android and iOS devices. But the biggest disadvantage is that it can’t be used to test it on real iOS devices.

It is another framework that works perfectly for both Android and iOS devices. The major difference that sets Calabash apart from the other frameworks is that tests are written in Cucumber, which makes the features and the test case easy to read.

EarlGrey 2.0(Latest version) combines EarlGrey 1.0 and XCUITest to create a native iOS UI automation test framework. It allows the user to write a clear, concise test that enables the process interaction with the XCUITest.

The ultimate aim for us as a leading QA company or any tester for that matter is to reduce the bugs as much as possible when it is delivered to the customer. The important decision for a tester to make is which testing should be made and which framework to be used at each level of development so that the potential bugs can be fixed at the earliest stages possible. So if we were to keep these aspects along with what we have discussed in this iOS App Testing Tutorial in mind, then getting your app approved by the App Store will become a walk in the park.