Software Testing is surrounded by many myths and misconceptions. Let us unveil the reality behind them.

Software testers are considered to be the gate-keeper of the quality and hence are very vital to the success of any software. Still, this ever-evolving career option Software Testing is surrounded by many myths and misconceptions. Let us unveil the reality behind them:

MYTH: Fighting against the bugs is the only Bull’s Eye

REALITY: To most of us, even the tasks of a software tester are ambiguous. Some of us say the core task is to make the software bug-free but it is not at all the truth. Software testers have a huge list of functions to be performed, including checking the interoperability, inter-browser acceptance, smooth working, security against malicious codes, and fighting against the bugs. So making the software bug-free is just one of the tasks. There is indeed a bigger picture beyond this little point.

Also, even if the software is fully protected against the bugs, there may be other issues hampering the smooth functioning of the software viz, server crashes in the period of huge traffic on the site or some browsers not supporting the software, some users are unable to access or transact through it, and much more

REALITY: This myth is too harsh to be real for software testers who actually put in so much effort day and night to ensure the quality of the software. So in reality, both the professions go complementary. Developers are not able to launch their software into the market until it is duly tested by the testers to get certain about the security and QA of the software. So the developers are dependent on testers.

Hence, none of them are inferior or superior to each other.

REALITY: This is one of the biggest misconceptions that we think that any person from an engineering background can join a team of QA Analysts. In order to fully understand the system and debug the root cause of any issue, testers need to know about the underlying database structure and the different technologies used.

REALITY: This is a misconception not only in the context of software testing but all technology-related fields. We believe that with the increase in automation, human intervention will decrease but this is not the case. Even automated techniques require a human application and continuous monitoring by expert personnel. So automation testing can never substitute manual testing techniques completely, rather the integration of both in the right proportion will bring greater results.

MYTH:Testing does not contribute to value addition

REALITY: It is not necessary that value addition happens only when some new software is designed. Testing the software also contributes to the cycle of value addition by enhancing its quality and improving its durability.

MYTH: Testing may lead to delay in launching new software

REALITY: It is true that testing is time-consuming but the time spent on it never goes worthless. Testing should be considered as a part of development only instead of considering it as an extra activity. Thus, time utilized in testing or QA is counted in the process of designing and development itself. Moreover, automated techniques have reduced the wastage of time in lengthy manual methods so we can not conclude that testing leads to any delay in launching if new software.

REALITY: Software testing is a continuous process. As and when there are changes in any coding or programming of the software, testing is required to risk-proof those changes, even if they are minor. With increasing users of your site, there may emerge new issues related to the performance of software, so testing is required at every step.

It is not only done once before it is launched, rather the process continues even after years of its initial designing and introduction in the market. The malicious codes or worms can come up any time to damage your software, so it is a whole-time job. 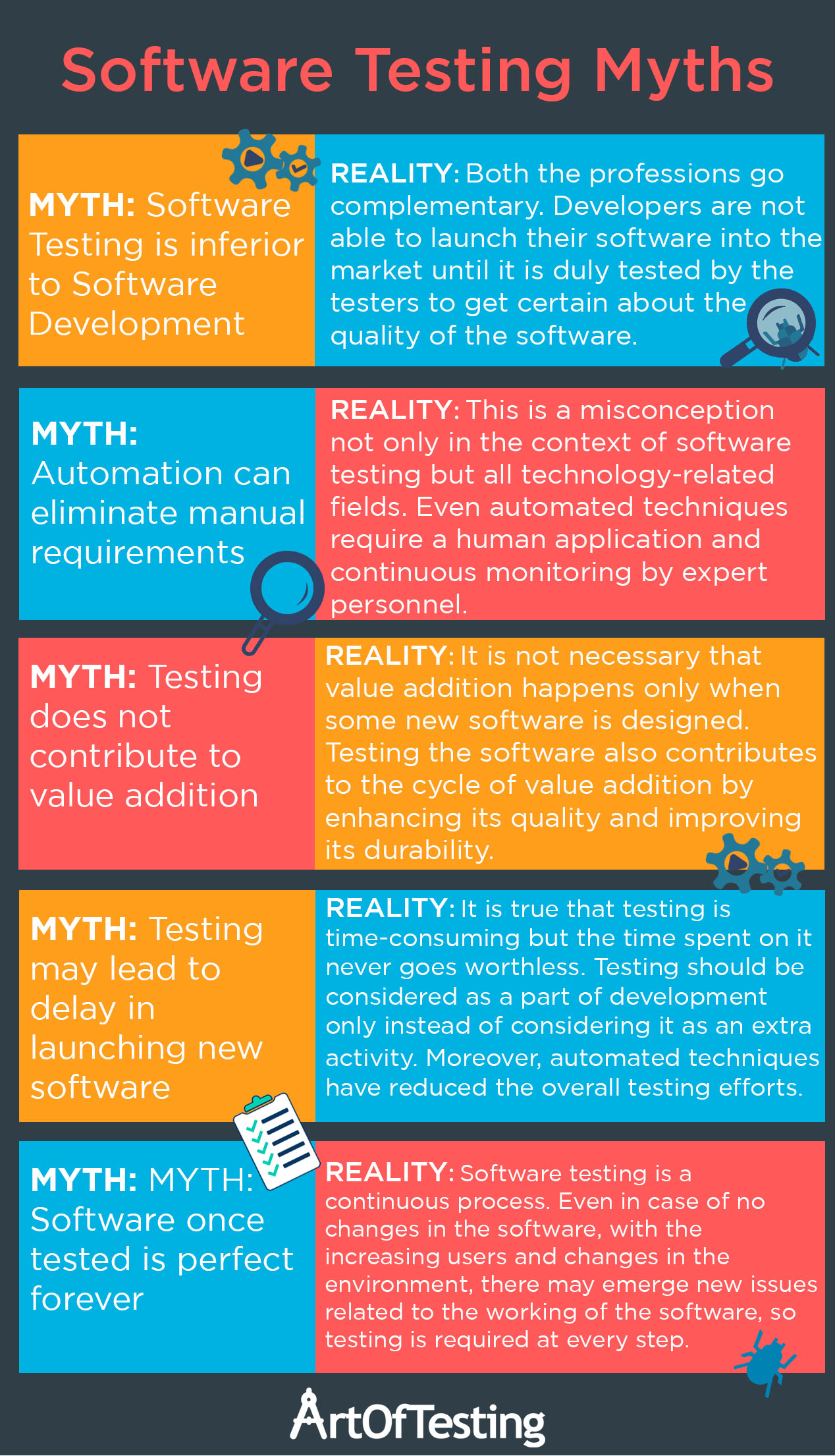 If any of these myths were stopping you to choose software testing as a career, so clear your minds and be confident about your choice. And if you are already a software tester and you had wrong notions about your tasks, I hope this article will show you the true picture and help you work with more efficiency.

Kuldeep Rana is the founder of ArtOfTesting, a software testing tutorial blog. He is a QA professional with a demonstrated history of working in the e-commerce, education and technology domain. He is skilled in test automation, performance testing, big data, and CI-CD.